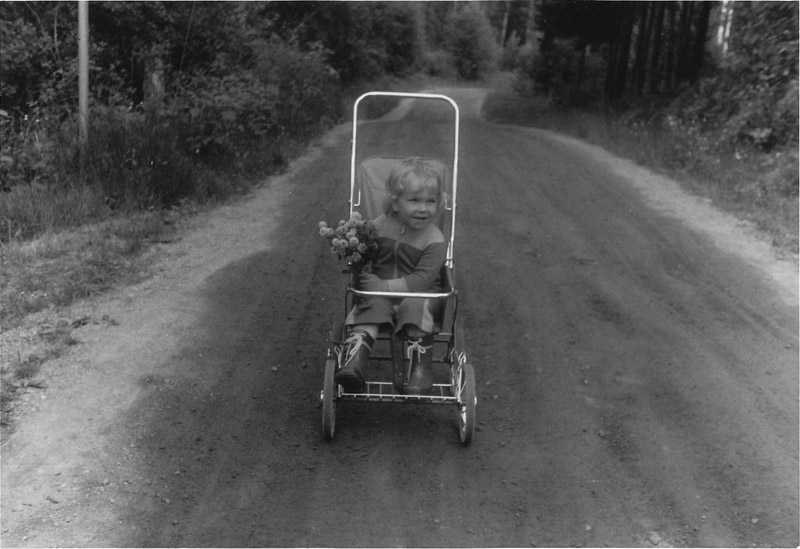 Mattias Hellberg, born & raised in Karlstad, has been part of the Swedish music scene since the late 80’s. His love for and obsession with music started in the pre adolescence years, and at the age of 14 he started his first band Ugly Jake in 1987. This band transformed into Nymphet Noodlers in 1992. He has played guitar in several rock bands like The Hellacopters and The Soundtrack of Our Lives, but it is as a solo act Mattias reveals the wide and colorful spectra of influences and beauty of his ragged soul in a most personal and sometimes funky way.

NYMPHET NOODLERS AND THE NINETIES

Nymphet Noodlers released 1 ep Impeccable Selection & 1 album Going Abroad and toured around Scandinavia until they broke up in 1996. The year after Hellberg moved to Gothenburg where he became an important part of a vibrant music scene. Besides working on his own material he sang in short-lived furious boogie rock band Hot Love and played guitar in alternative country band Alimony for a short while. 1998 included a stint as guitarist with The Hellacopters, recording and touring with the band.

In 1999 he and one of his fellow musicians from Nymphet Noodlers, Martin Hederos, recorded 8 cover songs meant to be a demo to get gigs in bars. Old friend Niclas Stenholm released the songs on the album M. Hederos M. Hellberg in 2000. Hederos & Hellberg turned out to be a totally unexpected success. Critics went nuts about it and all of a sudden they were a ”band” playing sold out theaters all over Scandinavia. Ryan Adams discovered the duo when he was playing his first concert in Gothenburg, and he brought them with him on a European tour as Hederos & Hellberg`s second album, Together in the darkness was released in 2001. However, at the same time Martin was also busy touring with his other band The Soundtrack of Our Lives, which got a major contract with Universal in the US. Eventually two international careers were too much to endeavor and Hederos & Hellberg had to go separate ways. In January 2003 they did a last performance in a sold out Gothenburg Concert House.

Mattias focused on his own material and recorded songs written between 1996 and 2003. The self-titled, first solo album Mattias Hellberg was released on legendary swedish label Silence records in 2004. In 2005 he was asked to sing with legendary Swedish rock unit Nationalteatern’s Rockorkester for a summer tour. He has been a full member of the band ever since, touring with them every year. He also toured & recorded with Swedish artist Stefan Sundström as guitarist during 2004-2005. Sundström is an acclaimed Swedish singer/song writer, who’s been on the scene in Scandinavia since 1991.

Mattias curiosity and open ears has made him seek out and get inspired by music from all over the world, be it Nigeria, India, Jamaica, Mali, Finland, classic rock n` roll & soul etc. As he states it himself “I love all music with soul and feeling, not as a genre but across genres and continents. Music that convey depth and understanding of human beings, both their moments of happiness and those of despair.” This manifested it self- among other things- in reggae/dub/rock project, Kanzeon, which released their self-titled album in 2006. In 2007 he wrote, played and recorded songs with Ugandan/Swedish soul bird Jaqee for what became her album Nouvelle d’amour. The album was a huge success and Mattias toured with Jaqee for the Nouvelle tour.

YEAR OF THE MOOSE

2008 was the year of Mattias Hellberg & The White Moose and the album Out of the frying pan into the woods. The album was written and recorded in only 2 weeks and reflected Mattias urge to revisit more energetic and out going rock n`roll with inspiration from psychedelia and rough grooves. The band was touring in Europe in 2009.

HIGH IN THE LOWLANDS

2011 The album High In The Lowlands was an intimate collaboration with longtime friend Mattias Areskog (Brothers of end). Only the two of them stuck in a cabin for just a week High in the Lowlands is the beautiful result of yet another Hellberg masterpiece. Throughout his work Mattias Hellbergs sad souled songs of Scandinavian heartbreak, be it with Hederos & Hellberg, Healing Hand, The White Moose, The Fur Heads he’s always had a somewhat rootsy approach to the ancient troubadour tradition whose linage Hellbergs music clearly represents. The album High In The Lowlands was released in Europe, the US & Canada.  For the tour of the album Mattias put together a band that he named The Fur Heads. Johan Håkansson on drums, Nikke Ström on bass & Jonas Kernell on keyboards.

2012 A live album Bless me, from what was supposed to be Hederos & Hellberg’s last concert, was released. Followed by a short scandinavian tour by the duo.

Recordings of the upcoming MH album Gurimolla! were done at different locations  such as Silence Studio & Svenska Grammofon Studion, during the summer and fall . This time it’s a pure band driven album and the sessions were very creative with great inputs from everyone involved. As on High In The Lowlands it’s a collaboration with the great songwriter & producer, Mattias Areskog.

The album Gurimolla!’s first single Coffee & Croissant released in spring 2013, is a super catchy rock & pop rocket of a song, celebrating love and lust inna cheerful way.  Second single Wait for the morning is a soulful groover with soothing lyrics, true lovers rock. Gurimolla! the album is a genuine celebration of different genre’s . Mattias’s been around for a while on the music scene and you can tell that he is a true believer in the power and healing of rhythms & sounds, always looking for new stuff to get influenced by. Thru out the year Mattias also joined forces with swedens biggest rock act Håkan Hellström for a summer & winter tour of scandinavia. Ending at the 7th of june 2014 at a sold out Ullevi stadium in Gothenburg, Sweden. 69343 people attending, making it the biggest show ever by a swedish act in Scandinavia. Gurimolla! also won the Manifest Award for best singer/songwriter album of 2013!

Fall 2014. So now it’s time to recognize 20 years as a recording artist. On the album In Egolectric Harmony Mattias is for the first time completely alone in the studio with his electric guitar, doing his own solo interpretations of songs from his first band Nymphet Noodlers all the way up to songs of present days. It sure is a soulful touch on these recordings with Mattias’s ragged voice and dynamic electric guitar in egolectric harmony, indeed. Intimate, never smooth but bittersweet & rough.

This was followed up by a solo tour in sweden & norway. After that Mattias took off for a “pilgrimage” to Jamaica, a long awaited journey to the homeland of rock steady/reggae/dub & ska. A music that is close to Mattias heart since an early age. There he ended up in the backyard of legendary guitarist Earl Chinna Smith who’s played with all them great ones from the early 70’s up ’til now, even working with the likes of Lauryn Hill & more. Mattias joined Chinna and his fellow musicians Inna de yard for a groovy jam session thru out the night.

With Håkan Hellström in New York

Sold out winter tour with Håkan Hellström in scandinavia. 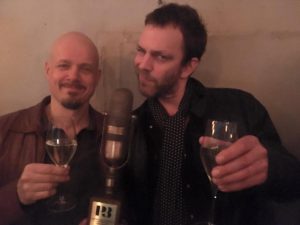 Starting off the year receiving the P3 guld best swedish live act award with the Håkan Hellström band for the tour of 2016. In march there’s a sold out tour with Janove in norway & denmark. 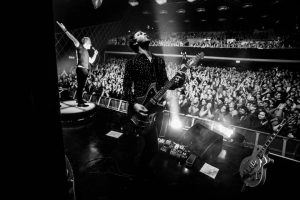 After that rehearsals for the upcoming Håkan Hellström summer tour starts. 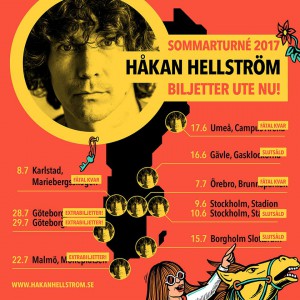 Well, well…both tours with Janove and Håkan Hellström were quite successful and overwhelming. I’m a lucky guy doing this & I’m so grateful for it.

Ended off the year with a very special reunion gig with Nymphet Noodlers, it was a blast! Read a tasty report from the great Steve Worrall’s Retro man Blog  here

As a a very special guest we had the  mad horn man Mats Gustafsson. Check it out.

Starting off with a new album & tour with Janove.

And of course a festival tour 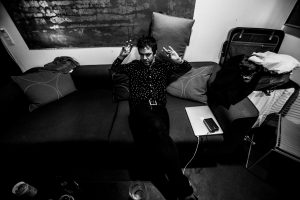 I also had sessions with my dear friend and songwriter Mattias Areskog for a possible new solo run…. we’ll see about that.

I played guitar on the album “Brenn siste brevet” with the great Erlend Ropstad.

The album was extremely well recieved and we toured winter, summer and fall.. 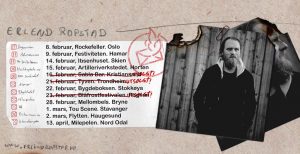 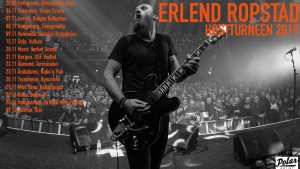 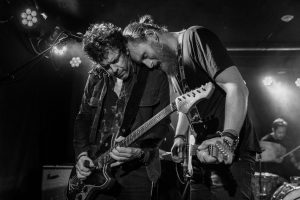 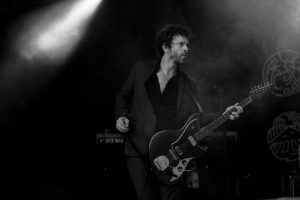 There has been sessions with Hederos  Hellberg for an upcoming album.

We keep up having sessions with Janove for a new album & tour in 2021.

Finally we are back together, me and my beloved friend Martin Hederos. It’s been a while since Together in the darkness, 20 years!

Well, we been kinda busy in the business both of us for all those years.. But we got one week in the summer 2020 to go and record a new album our favorite studio Silence in the woods of Värmland, sweden. 7 new original tracks and a cover of Din hand by our great late friend Robert Strängen Dahlquist. All songs in swedish this time, so… hope y’all dig it!

You can get the album on vinyl or digital here 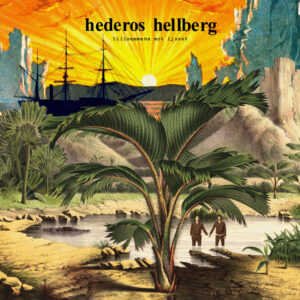